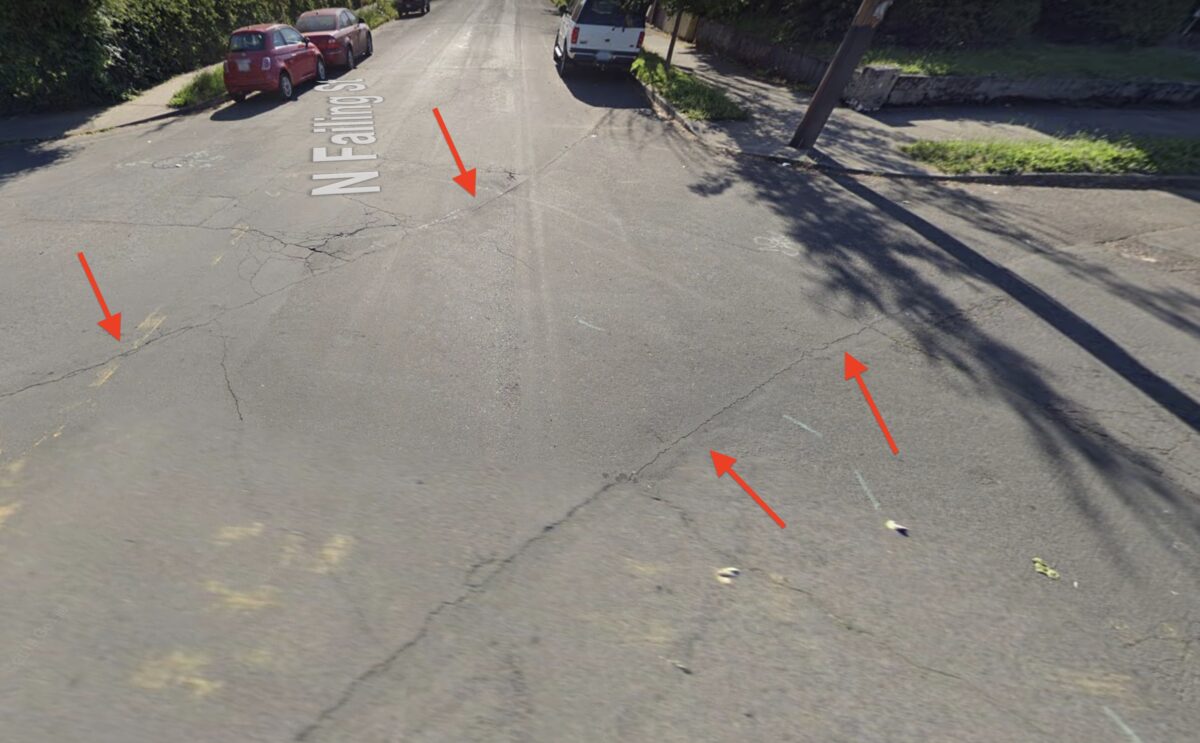 Outlines of an old traffic diverter are still visible at North Failing and Haight.

(This article was written by Eliot neighborhood resident and transportation advocate Allan Rudwick.)

During the pandemic I’ve been doing a lot of reading about the history of the Boise-Eliot neighborhood and I’ve come across a number of plans from the 1960s and 1970s that impacted inner north Portland.

As Joe Cortright has written in City Observatory, the Oregon Department of Transportation and other state and local government agencies destroyed Albina — the largest cultural center for Black Portlanders at the time — with the construction of several freeway projects and other planning initiatives. At the same time, Emanuel Hospital was expanded intentionally into the area between North Williams and Kerby all the way to the I-5/I-405 interchange. This was presaged by a short study called the Central Albina Study which recommended most of what is now the Eliot Neighborhood be demolished for industry (see below). Warehouses were recommended west of Martin Luther King Jr Blvd and South of N Fremont. This was later amended to west of Williams Avenue. 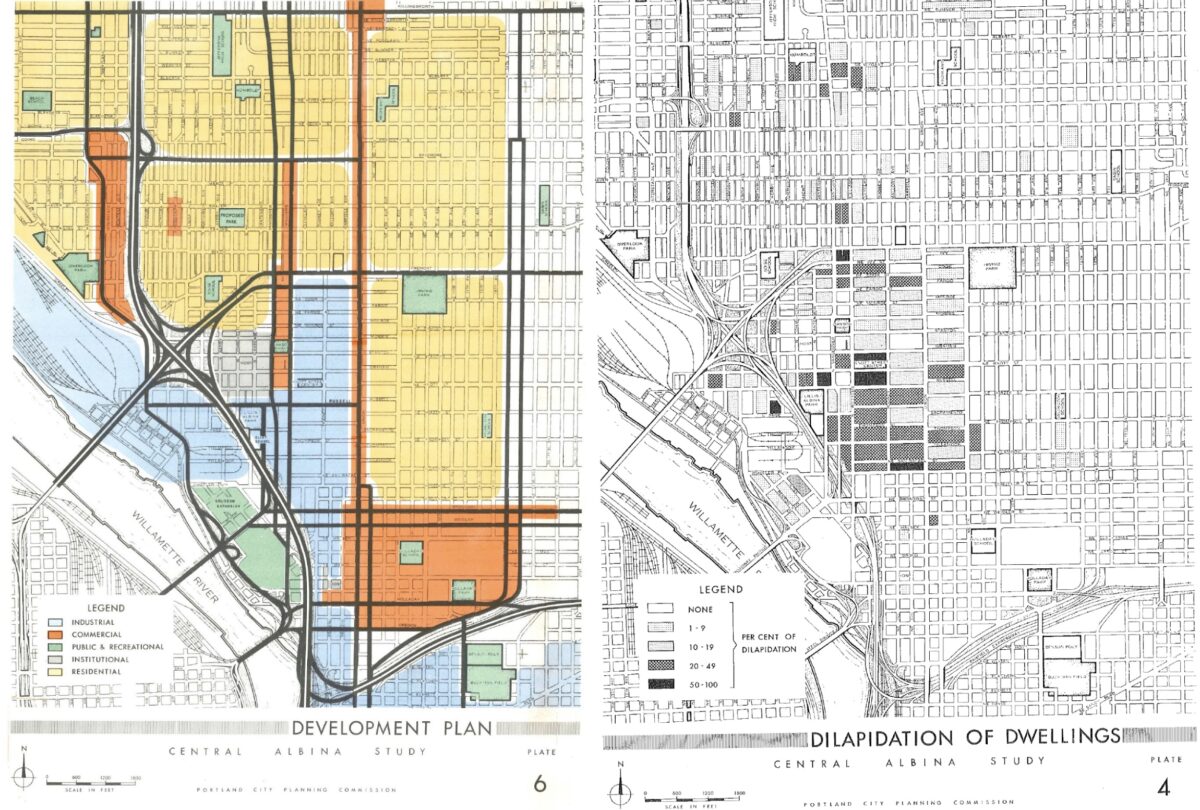 The Central Albina Study was very quickly ready to sacrifice most of Boise-Eliot to industrial land zoning and demolish much of what is the largest collection of 1890-1910 homes in the city of Portland. Many of these houses were considered to be “dilapidated” in the 1960s — even though 60 years later some of these same buildings are still standing. Partially in response to protests from residents, the government agencies agreed to embark on a program to ‘improve’ a different part of the Albina Neighborhood, north of Fremont St.

This project would be called the Albina Neighborhood Improvement Project. This project made certain infrastructure and financial improvements that benefit neighborhoods: home improvement loan assistance, improved street lighting, traffic diverters and installing a neighborhood park (a number of houses were removed for this park). The system of traffic diverters shown in the map above were implemented to prevent through auto traffic from taking straight routes in the five by six block area bordered N Fremont, Mississippi, Skidmore and Vancouver streets.

The large neighborhood park described in the plan (now Unthank Park) was created in part to get a large contiguous parcel for a future school (envisioning Boise and/or Humboldt Schools being relocated). At the time there was a focus on larger sites for schools to give staff more parking than they had at the time. It seems like this was not needed as the Boise School (now Boise-Eliot/Humboldt) is doing fine with a similar footprint that it had in the 1960s. While this was happening, the Eliot school – located where Harriet Tubman Middle School is now – was proposed to be sold off for industrial land. Clearing the residents out of Eliot would make it no longer necessary. 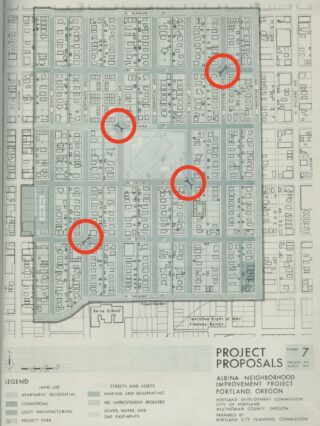 Interestingly in this same document scan, the Irvington Community Association was also able to get its own diverter at NE 16th and NE Tillamook which is still in place today. One thing I remember from the City of Portland’s Traffic and Transportation class is that the diverter at 16th and Tillamook was removed during water main construction and neighbors fought to have it rebuilt. I was digging through the City’s records to see what happened to these diverters from the Albina Neighborhood Improvement Project in the Boise Neighborhood and what I found was water maintenance records in 1998. The archival satellite photos show this diverter disappearing between the 1996 and 1998 photos. This leads me to believe that the diverters were removed for construction and were never replaced. Around the same time, the Self Enhancement Inc. headquarters was built at the Unthank Park site in 1997. They may have encouraged the removal of the two diagonal diverters bordering the park at that time.

This project was so popular residents petitioned to add large areas to the improvement district, and some were added to the north, but there was never a southward expansion which prevented homeowners south of Fremont from getting access to loan assistance and other benefits.

This research fascinated me because it shows evidence as far back as the 1960s that City of Portland Planners knew how to improve a neighborhood and make it more welcoming for residents — whether it meant giving money to people to improve their properties, installing auto traffic diversion, or building a new neighborhood park. There is also evidence they knew how to destroy neighborhoods. Building highways through them, using eminent domain to force the nicest housing to be vacated, and creating the conditions for disinvestment.

Citizens are right to push to make things better by advocating for small and large projects. Politicians should be wise enough to know the difference between a project that is going to make life better and one that will make it worse.

Do you have something to share with the community? Send it in and we will consider posting it here.