PBOT’s ‘Streets 2035’ initiative is under the radar, but could have vast implications 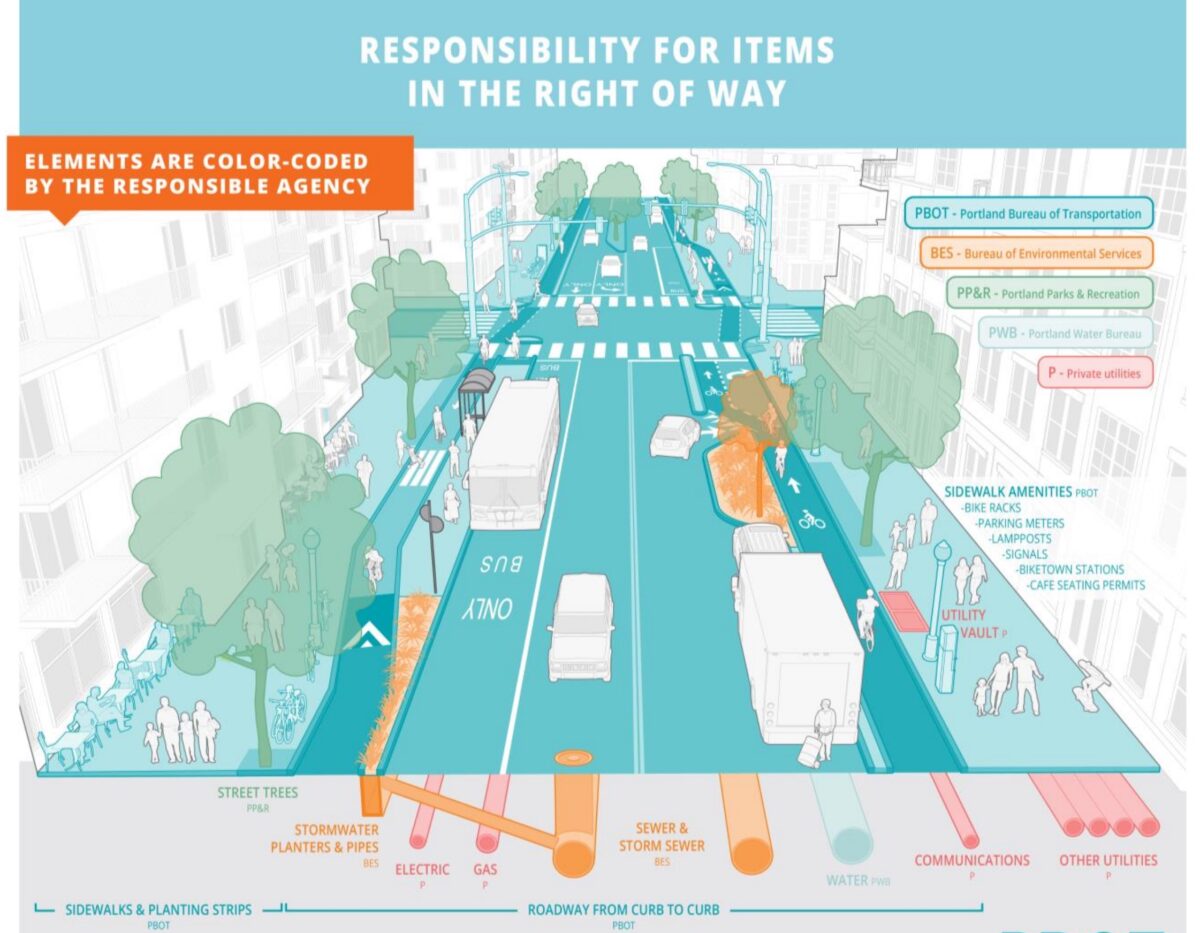 Lots of uses competing for space. Not all of them can win.
(Source: PBOT/Streets 2035)

The City of Portland’s Streets 2035 initiative might be the most consequential planning process you’ve never heard of.

Reduce situations that require individual interpretation and inter-bureau negotiation.
— From a Streets 2035 presentation

Based on the simple premise that our population is growing but our streets are not, Streets 2035 is the Portland Bureau of Transportation effort to establish a decision-making framework for how right-of-way is allocated. Or in their words, the project is an attempt at, “identifying a right-of-way allocation framework that moves streets forward to achieve citywide objectives, minimizes the need for an exception process, and helps bureau staff achieve a predictable and transparent process for themselves and external stakeholders.”

Think of the (sometimes) competing goals of pedestrian safety and a complete bike network. The former might call for a curb extension that makes the latter harder to build. Or consider, like we’ve seen with the Hawthorne Pave & Paint debate, how the need for automobile and transit access impacts citywide goals for protected bike lanes.

For such a hot-button topic as who-gets-what, it’s surprising this initiative has flown so far under the radar.

Well over two years old already, PBOT has not taken the plan to the public and, based on the official website, doesn’t appear like it plans to. This effort is likely to influence cross-section designs and what gets built. More people should be aware of it.

PBOT is leading Streets 2035 because they are (by law) in charge of managing right-of-way, but five other bureaus are closely implicated. Portland Parks & Recreation, the Water Bureau, the Bureau of Environmental Services, the Bureau of Development Services, and the Bureau of Planning & Sustainability all play a role because they own and manage infrastructure that lives in the right-of-way. The “2035” part of the name stems from fact that in many ways this is an addendum to Portland’s 2035 Comprehensive Plan.

There are four main objectives for Streets 2035 (as per a PBOT presentation):

…to develop context-sensitive decision-making framework that guides space allocation in the right-of-way to:

That second bullet point really stands out to me. In addition to giving planners and developers more clarity on what goes where, Streets 2035 appears to be an attempt by PBOT to deflect blame for unpopular and/or controversial decisions. When a project manager tells a group of advocates they cannot fit a bike lane in a particular design, for instance, they’ll be able to hold up the Streets 2035 guidelines and point to any number of reasons that space for cycling simply isn’t feasible in a particular context. (We got a taste of this when PBOT decided against bike lanes on Hawthorne, despite them being called for in multiple planning documents and aligning with many city goals and values.)

In a summary of their Phase 1 work, PBOT separated out the right-of-way into three distinct zones (above): “pedestrian”, “curb/flex” and “travelway”. The pedestrian zone is where people walk and street trees grow. The curb/flex zone is where bike lanes are installed, people park cars, and (increasingly) where outdoor diners eat. The “travelway,” according to PBOT is where “cars, buses and streetcar, and trucks drive.” It’s a bit of a red flag to me whenever bicycles are pushed into the margin and not on the same level as cars, so this is something I plan to watch closely as the plan’s recommendations are implemented.

As you can see, the implications of Streets 2035 to bicycling could be profound — especially in a city where cycling isn’t strongly championed by anyone in City Hall or among PBOT top brass.

PBOT presented an update on Streets 2035 to their Bicycle Advisory Committee in October 2019. Members voiced several concerns. One person worried the process didn’t center equity and justice its approach. Another person wondered how an influx of leaves from more street trees (if that was an outcome) would impact the cleanliness of bicycle and mobility device users. Another BAC member worried that the process was too technical and didn’t incorporate values like social equity, air quality and Vision Zero into its framework. Several people said the entire project felt too driving-centric and that they’d like to see more carfree typologies included.

According to the Streets 2035 website, the project is nearing completion. Now would be a good time to learn more about it. You can share feedback and ask questions of PBOT Project Manager Matt Berkow via This email address is being protected from spambots. You need JavaScript enabled to view it..