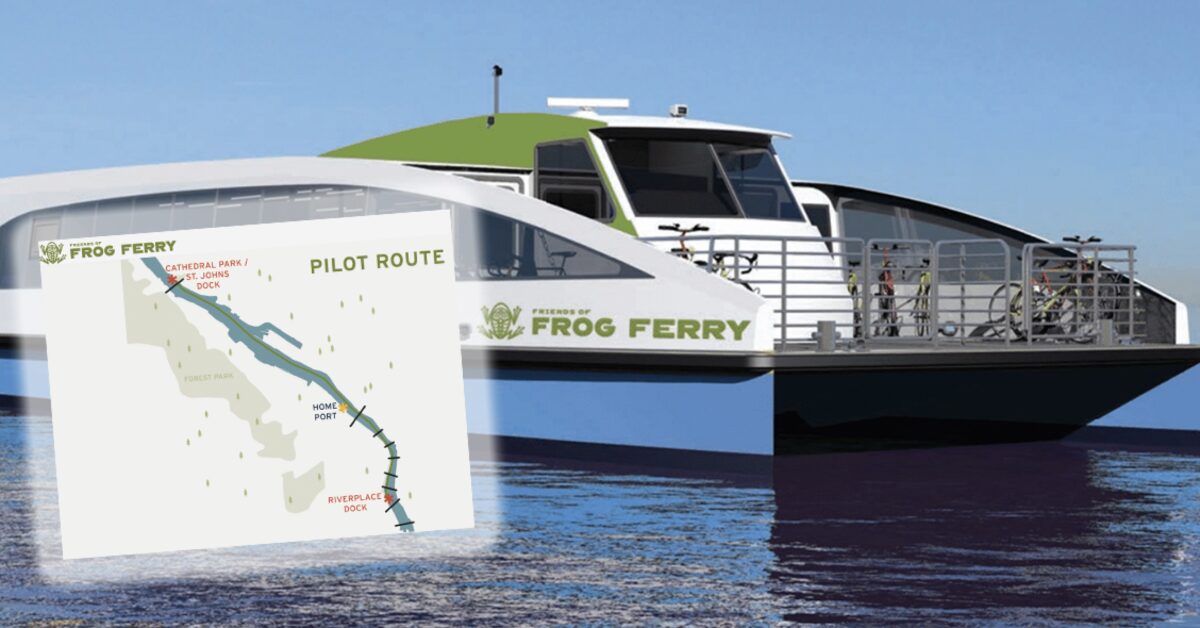 Bikes on board in a rendering of a Frog Ferry vessel.

“We are all ready for a new and better Portland.”
— Susan Bladholm, Frog Ferry

At a press conference on Tuesday, the nonprofit Friends of Frog Ferry detailed plans for a pilot project that will launch next summer. Once the vessel hits the water, about 70 people at a time will be able to ride from Cathedral Park to RiverPlace in 25 minutes — about half the time the 9.5 mile distance would take to travel by bicycle and just a few minutes slower than driving (without traffic).

We’ve tracked this ambitious attempt to establish a Willamette River commuter ferry since it first gained steam in 2018. Positive results from a feasibility report released by Friends of Frog Ferry last fall gave the group momentum to seek funding and key partnerships for the pilot project.

One of those partnerships is with the City of Portland. At Tuesday’s press conference a name familiar with local transportation innovation, former PBOT Commissioner and Mayor Sam Adams, voiced Portland’s official support for the project. As director of strategic innovations for Mayor Ted Wheeler, Adams said the City of Portland will sponsor Friends of Frog Ferry’s $3.3 million federal grant application. 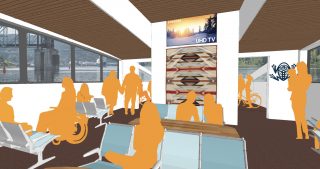 It would be a new way to “ride” from north Portland to downtown.

With Portland and the State of Oregon on their side (ODOT has awarded $500,000 toward the pilot project) and with necessary planning processes in the rear-view mirror, the pilot project is all queued up for federal funding. Once the expected funds come through, Friends of Frog Ferry says they’ll run one, 70-passenger vessel 14 hours a day Monday through Friday from St. Johns to RiverPlace. Saturday service is also on the table. According to the group’s estimates, 1,000 people will use the ferry per day and 600 of them would have previously driven cars for the same trips.

As you can see in the images, bikes will be allowed on the ferry. Tickets will cost $3 each way ($2 for honored citizens). The vessel that will be used in the pilot project will run on R99, a renewable diesel fuel. Ultimately the system is expected to use an all-electric fleet.

“A passenger ferry service will help address equitable transit for all Portlanders and better connect residents with the outdoors and our river system,” said Friends of Frog Ferry Founder Susan Bladholm in a statement. “We are all ready for a new and better Portland, one that prioritizes social and climate equity and the future for our city. Frog Ferry is part of that vision, and we are confident in our city and downtown as the pandemic eases and residents begin returning downtown.”

The pilot project is planned to run for two years (2022 – 2024) at a cost of $9.4 million. After 2024, the plan is to add more vessels and stops. Capital costs to stand up the full system are estimated to be $40 million and the service would cost about $7 million per year to operate.