‘Massive mobilization’ against ‘villains’ on tap for Friday’s Climate Strike 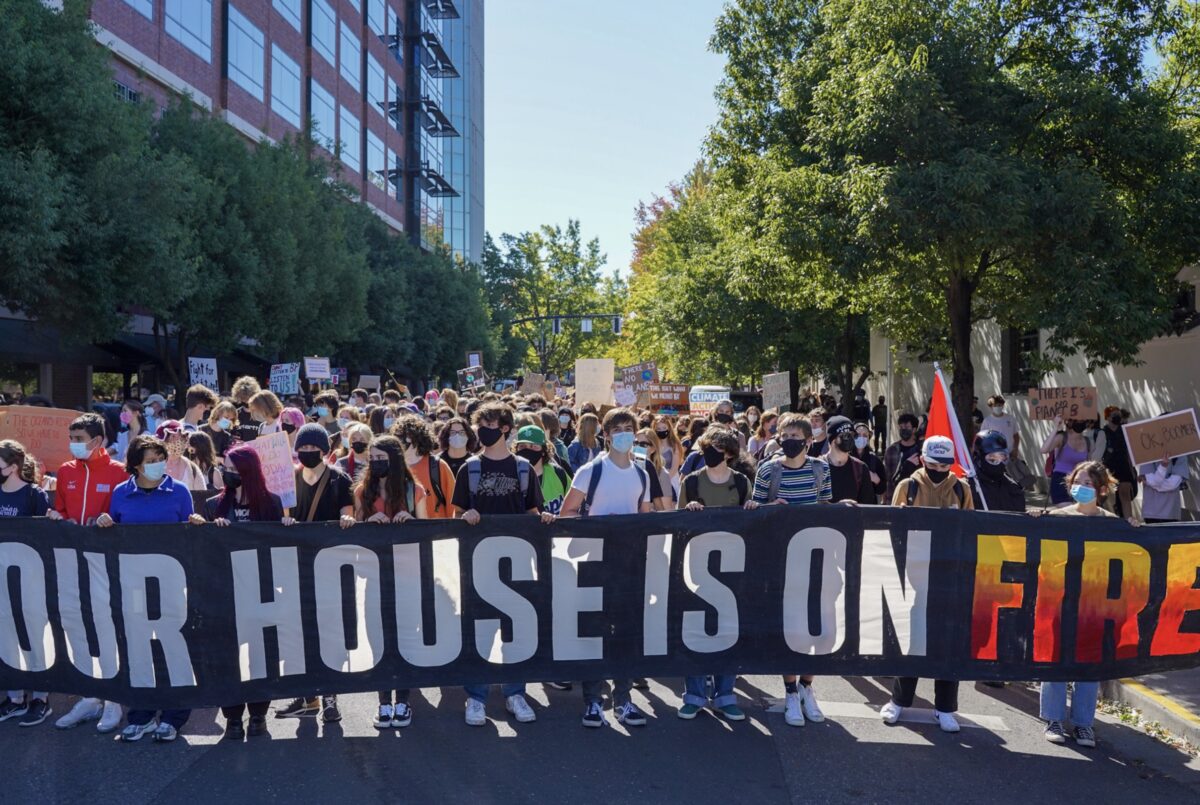 You can help them put it out by taking part on Friday. (Photo: Jonathan Maus/BikePortland)

I found the last Portland Youth Climate Strike to be one of the most powerful events of the year. This time around, organizers appear to be headed for something even bigger.

This Friday, organizers expect thousands of people of all ages to leave their classrooms and jobs and march to downtown Portland to help fight for stronger action on climate change mitigation. They’re calling it: “Not Your Average Climate Strike: Massive Multigenerational Mobilization in Portland.”

They plan to meet at Portland City Hall for speeches and a rally at 11:00 am and then march across the Hawthorne Bridge to Revolution Hall on SE Stark and 13th where they’ll join the Portland Climate Festival around 2:00 pm.

At City Hall, youth leaders will announce their demands and ask elected officials to sign a climate pledge.

This year the strike is targeting what youth activists call Portland’s “top four climate villains”: NW Natural (“a fracked gas monopoly and the single largest fossil fuel company in Oregon”), Zenith Energy (“a fossil fuel transloading facility… misrepresenting its operation as a ‘renewable fuels’ terminal in an effort to greenwash its image”), Portland Business Alliance (“an umbrella organization for many of Portland’s worst climate polluters and anti-democratic actors”) and the Oregon Department of Transportation (which, “continues its status quo plan to spend billions of dollars widening freeways instead of robustly investing in public transportation”). All four of those organizations are, “contributing to the climate crisis through their emissions, using marketing techniques and misleading advertising to confuse the public, and by spending money on lobbying and campaign contributions to undermine the democratic process and opportunities for strong climate action through public policy,” organizers wrote in a statement about the event.

To learn more about the event and the “villains” it targets, read the backgrounder here.

And lest you think this “youth” event is just for young people, think again. JJ Klein-Wolf, a sophomore at Ida B Wells High School who’s helping organize it said, “As much as teens seem like they can do everything on their own, we need strong adult role models and support to continue achieving our goal of a stronger and safer tomorrow.”

Jonathan Maus is BikePortland’s editor, publisher and founder. Contact him at @jonathan_maus on Twitter, via email at This email address is being protected from spambots. You need JavaScript enabled to view it., or phone/text at 503-706-8804. Also, if you read and appreciate this site, please become a supporter.

Original link
(Originally posted by Jonathan Maus (Publisher/Editor))
Tweet
Election recap: Hardesty holds onto over 40% of vo...
Where have all the riders gone? PBOT preps for fir...