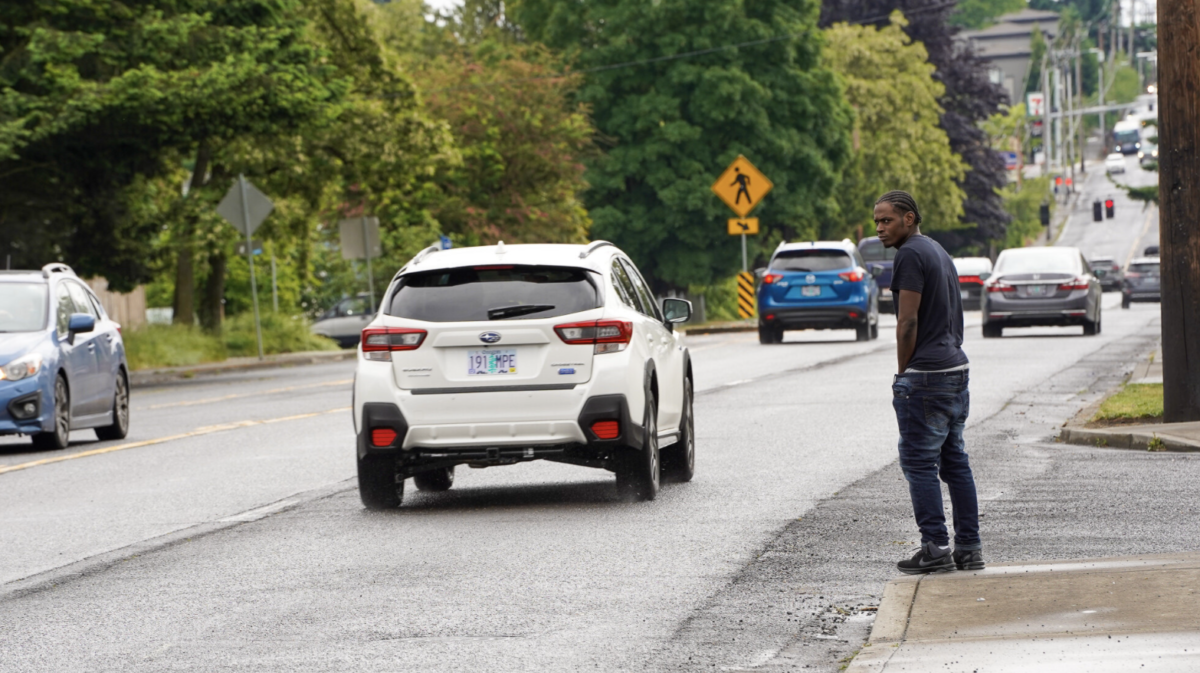 A man tries to cross 82nd Avenue at Alberta, the intersection where two people were killed by drivers in April.
(Photo: Jonathan Maus/BikePortland)

Wednesday was a very consequential day for traffic safety in Portland.

“I have moved from hating cameras, to really understanding how, in relationship with other safety improvements, they could help keep people in our communities safe.”
— Jo Ann Hardesty, city commissioner

At their morning session Portland City Council finally authorized the Portland Bureau of Transportation to move forward with a contract for automated enforcement cameras. This contract was first given the go-ahead by council 18 months ago but was mired in red tape and stuck at the city’s procurement office.

Then this afternoon the Oregon Senate passed House Bill 2530, which repeals the existing sunset on the city’s traffic camera program that was set to expire in 2024. “We are optimistic that the governor will sign this,” a PBOT spokesperson shared with me today, “Allowing the speed safety cameras program in Portland to become permanent.”

And then at their evening session, City Council passed the 2021-2022 budget that included a last-minute, $450,000 amendment from PBOT Commissioner Jo Ann Hardesty that aims to, “Urgently respond to the crisis of vehicular violence.”

When these three things are taken together, they represent significant progress and give PBOT clear marching orders to tame the city’s most dangerous intersections.

At City Council today, PBOT Safety Section Manager Dana Dickman told Mayor Wheeler, Hardesty and the rest of council that the new, five year, $15 million contract with Conduent State & Local Solutions, Inc will allow PBOT to install twice as many cameras as they have now. “This contract will allow us to install up to 20 fixed speed cameras [total] and 20 intersection cameras so it’s essentially a little bit more than doubling the system,” Dickman said.

Despite the clear effectiveness and urgent need for automated cameras to cite drivers for speeding and red light running infractions, Portland has installed only eight of them in the past five years. One of the barriers to expansion was that state law requires a sworn police officer to review each citation. PBOT tried to change that law at the legislature this year, but lawmakers and police unions weren’t ready to pass it.

Asked how a major expansion of the camera program will be possible with the police officer requirement still in place, PBOT spokesperson Dylan Rivera told BikePortland today that, “We have agreement from our partners at the Portland Police Bureau, and the courts that handle speed citations, that they both can handle the additional work that will come with the expansion in the number of cameras.”

Rivera said PBOT could install even more cameras in the coming years without the officer requirement and that, “We fully intend to bring this issue up again [at future legislative sessions].”

Cameras alone will not solve our traffic safety crisis. Streets must be designed in a way that discourages dangerous driving and limits the consequences of it. PBOT Commissioner Hardesty understands this and today she put our money where her mouth is.

The $450,000, one-time boost from the General Fund will be used on projects on PBOT’s “high crash corridors” (streets with an above average rate of injury and/or death) in the next four to six months.

Hardesty’s commitment to address Portland’s rising traffic fatalities began in earnest when a man intentionally used his car to run over people in southeast Portland in late January. It was a vehicular rampage that left one person dead, many others injured, and put our entire city on edge. Then when two people died while walking on 82nd Avenue in late April, Hardesty had seen enough. She tasked PBOT staff to come up with a list of projects that would have an immediate impact on safety.

“It’s clear our city is seeing a tragic increase in loss of life from vehicular violence and we need to treat this like an emergency,” Hardesty said in a statement released today that also referenced a spike in deaths so far this year that’s over 50% higher than 2020.

The $450,000 will be spent on new traffic cameras, intersection “daylighting” projects, new traffic signals with leading pedestrian intervals, turn calming bumps at high-crash intersections, installation of flexible posts in center turn lanes (to prevent them from being improperly used), and warning signs at high crash intersections.

Today proves that Hardesty can deliver for PBOT and there’s nothing like excellent budget news to boost staff morale. It’s also another example of Hardesty’s flexibility when it comes to re-assessing her positions.

“I have moved from hating [automated enforcement] cameras, to really understanding how, in relationship with other safety improvements, they could help keep people in our communities safe,” she said at Council today. “I look forward to installing these cameras and installing the safety improvements so that it doesn’t matter what part of the city you live in, you can safely walk and bike safely.”