“We have to fight!” Youth anti-freeway activists protest outside ODOT headquarters 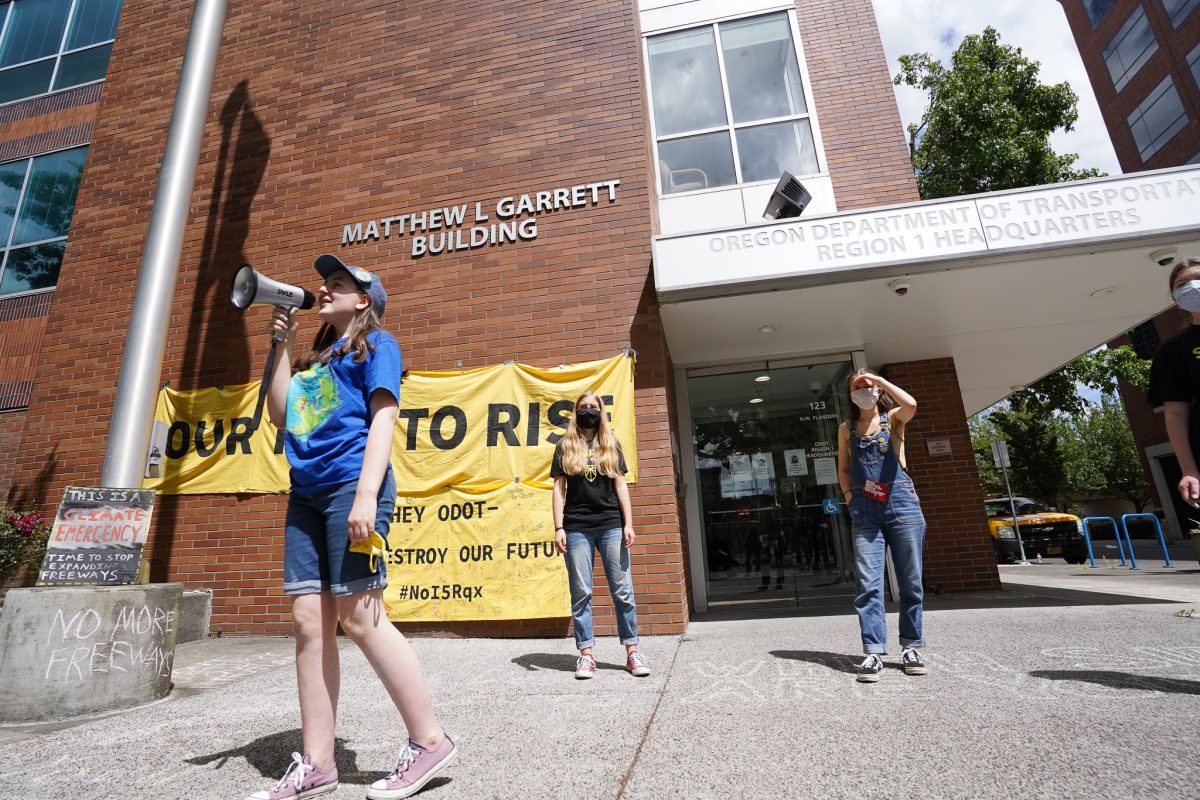 A growing contingent of young climate activists have brought their dissatisfaction with the Oregon Department of Transportation right to the agency’s doorstep.

“We’re striking because we are in the middle of a climate crisis, freeway expansion is only going to make that worse and we need ODOT to wake up and see that.”
— Adah Crandall, Sunrise Movement

“Hey hey! Ho ho! Freeway expansion’s got to go!” yelled 14-year-old event organizer Aurelia Nelson-Reske into the loudspeaker. She marched as she led the chant outside ODOT’s Region 1 headquarters building on Northwest Flanders in downtown Portland. Like many young people fighting to save planet earth from further climate change-induced catastrophes, Nelson-Reske stepped up after learning about international icon and climate activist Greta Thunberg. “Her speeches really inspired me to get more involved,” Nelson-Reske said.

Now her own words — and the words of the dozen or so other young activists that have been showing up — are being heard.

“We’re striking because we are in the middle of a climate crisis, freeway expansion is only going to make that worse and we need ODOT to wake up and see that,” explained one of the group’s leaders, Adah Crandall (whom you might recall from a rally against the freeway project at Tubman Middle School (her alma mater) in April). “People don’t think of ODOT as a villain in the climate crisis but they don’t realize that 40% of our state’s carbon emissions come from freeways ODOT is trying to expand and they’re trying to make that worse, and we need to stop them.”

“It’s completely ridiculous that everyone on the Oregon Transportation Commission (OTC) making the decisions about our climate fate are way older than us,” Crandall told the group who had formed a circle for introductions. “They are not going to face the lasting impacts of their actions. So we’re going to keep striking here every other wednesday until they meet our demands.”

At a previous rally (Wednesday was the fourth of the biweekly actions), ODOT Director Kris Strickler was spotted leaving the building. “We ran chasing after him with the banner,” Nelson-Reske told me during a break in the action. “But he just drove away. He didn’t talk to us at all. He’s embarrassed.” Why would the leader of a $5 billion, 5,000 employee agency be embarrassed? “Because there’s a bunch of kids standing outside their building yelling at them!”

But Nelson-Reske and her fellow protestors from Sunrise Movement PDX and No More Freeways are doing much more than just yelling. They’re getting organized, building networks, chalking messages on the pavement, and hammering home a list of demands to anyone that will listen. And yes, they’re also doing what teens often love to do: laugh with friends, take selfies and eat doughnuts (yesterday’s box was dropped off by none other than veteran transportation activist and No More Freeways co-founder Chris Smith).

The serious side of these rallies is that aforementioned list of demands that includes: a full environmental impact statement for the I-5 Rose Quarter project (something the agency has vehemently resisted in favor of a less robust process), an immediate moratorium of all freeway expansions in the region, an end to House Bill 3065 which would allow ODOT to toll freeways in order to build more of them, and they want Governor Kate Brown to appoint a youth climate advocate to the OTC. 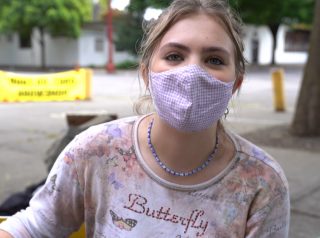 “I hope they can listen to us and have an open mind. There are ways to fix this if we can work together.”
— Rylie Norberg

15-year-old Rylie Norberg was writing a postcard to send to her State Senator when I asked why she showed up. “It’s ridiculous, knowing that they [Tubman Students] couldn’t go outside because there was so much smog in the air that they couldn’t even have recess. It’s very angering.” What does Norberg want ODOT to do? “I hope they can listen to us and have an open mind. There are ways to fix this if we can work together.”

The proximity of the planned freeway expansion adjacent to Tubman School has radicalized many young climate advocates. “I used to go to Tubman,” one person at the rally said during introductions, “and not being able to go outside during recess was kind of shitty.”

Now these young activists get to express their grievances directly to the source. They use words, a physical presence, large banners, and many sticks of chalk. Messages like “ODOT: Department of Climate Arson,” “Climate justice now,” and “Stop the freeways!” were scrawled all over the plaza in front of the Matthew L. Garrett Building.

The mood was very positive. Crandall said the group of strikers has grown steadily over the past few months. 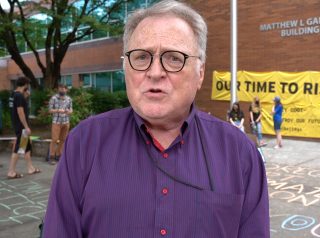 ODOT Region 1 Public Information Officer Don Hamilton emerged from the building to see what all the fuss was about. “We’re always encouraged to see political activities going on,” he said. In an interview with BikePortland, Hamilton asserted that ODOT is already doing enough to reduce the impacts of climate change. “It’s important to recognize that ODOT is doing a lot to encourage greater use of electric vehicles. The more electric vehicles we have on the road, the less greenhouse gas emissions we’re going to have.”

How can Hamilton justify ODOT being climate-friendly when they are pushing freeway projects that will increase driving capacity?

“ODOT understands the issues. We have to understand also that the highways are not going to end with the sudden stroke of a pen,” Hamilton replied. “We need to transition away more from traditional gas-guzzler cars into something that has a lot less greenhouse gas emissions. This is what ODOT’s working on right now. We understand there’s been a lot of protest about this and that’s understandable. But I think ODOT can be a significant player in helping to reduce GHG. The science tells us a lot about what improved congestion relief on some of the freeways would mean. If we see traffic move at a more steady speed, some of the studies are telling us we will see less greenhouse gas emissions on the road. If you look at what ODOT is doing in the larger picture, there’s a lot of good, good work going on that’s really going to assist in the climate change issues.”

“ODOT’s lies, ODOT’s greed, are not what this planet needs!” “Clean air is a right! That is why we have to fight!” the group chanted as Hamilton looked on.